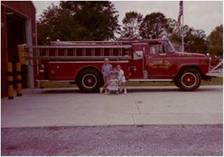 Over the years the department's membership has significantly increased fom the original 14 members listed below. The fire department is currently at 27 members ( see list under the roster tab). We have had several outstanding members belong to the Jackson Township Fire/Rescue. Some have started out as volunteers and retired as volunteers. But on the other hand, our department has had several volunteer firefighters advance to part-time, full-time, EMT, and even paramedics as career chooses. The township officials would like to thank the founders, current,  and past members of the Jackson Township Fire/Rescue for the years of service that they have provided to our community.